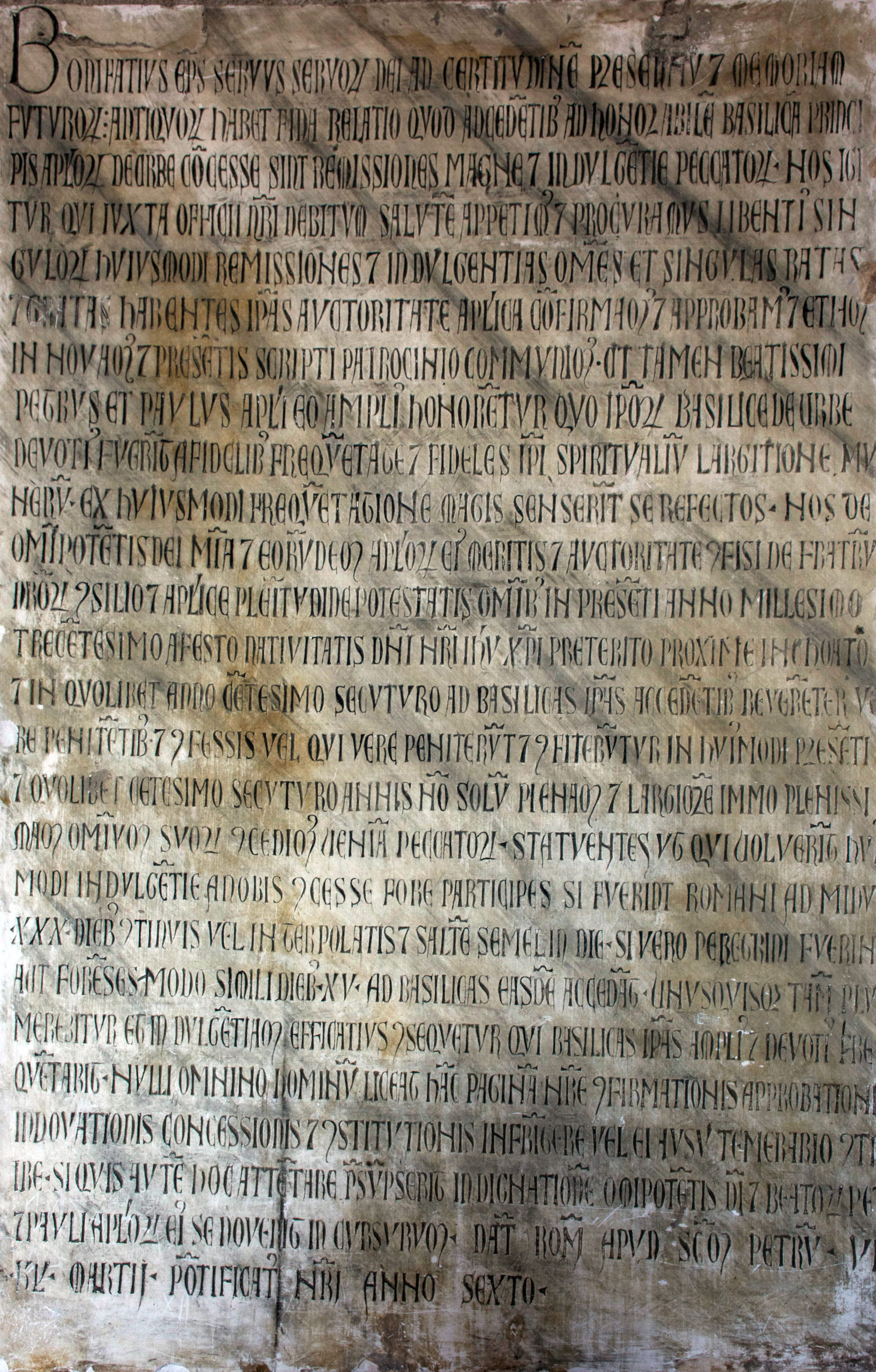 In the Catholic Church the Jubilee is the year of the remission of sins, reconciliation, conversion and of sacramental penance.

The Jubilee originates from the Jewish tradition that fixed, every 50 years, a year of rest of the lands, the return of confiscated lands and the liberation of slaves. The term comes from the Hebrew word “jobel”, ram’s horn, which sounded to signal the beginning of the Jubilee.

The Jubilee of 1300 was the first Christian Jubilee in history, born from the desire for peace of Bonifacio VIII, and demonstrates how political choices were in him always subservient to the needs of spiritual and temporal nature.

In late 1299 many pilgrims had gathered in Rome, driven by a real spontaneous popular movement, which made full of great expectations the new century. Inspired by this vast and spontaneous initiative and by the legend of One Hundred Years Indulgence and the one of the Forgiveness, Bonifacio instituted the Holy Year, in which all worshippers could gain a plenary indulgence by visiting the basilicas of San Pietro and San Paolo Fuori le Mura.

There are no reliable sources of the existence of this practice, but the memoirs of Cardinal Giacomo Gaetani Stefaneschi in the document  called “De centesimo sive Jubileo anno liber”, describes a  108 years old man who, questioned by Bonifacio, asserted that 100 years earlier, on 1st  January 1200 at the age of 7 years old, he and his father would met Innocenzio III in order to receive the One Hundred years Indulgence.

The Forgiveness was instituted by Pope Celestino V, the predecessor of Bonifacio VIII. On the 29th of September 1294, with the Bolla del Perdono (Bull of Forgiveness), the pope established that to those, confessed and repented, who were going to the church of Santa Maria di Collemaggio in L’Aquila, between 28th and 29th of August, was granted plenary indulgence. The Forgiveness, which continue nowadays, has in common with the Jubilee the indulgence in return for pilgrimage.

The Holy Year was announced on 22th of February  1300, with the Bolla Antiquorum habet fida relatio, but with retroactive indulgences. The unique fact of the retroactivity confirms that the pope did not raise the Jubilee movement, but that, on the contrary, he adapted to the wishes and expectations of the Christian people, demonstrating a pastoral sensitivity that belies that image of authoritarian and haughty man, only animated by the cult of power.

In the Bull was determined that the Holy Year would be repeated in the future, every hundred years.

The Jubilee had a great success and the influx of pilgrims from around the world to Rome was enormous, this meant a significant contribution of money, the celebration of the magnificence of the Eternal City and the consolidation of the primacy and prestige of the Pope.

Altri articoli
HISTORY OF THE PALACE OF BONIFACIO VIII
15 March 2017
Bonifacio VIII, the Palace, the Emperor and more
24 November 2016
Annunciation by Lodovico Mazzanti
18 May 2016
Transport of the Holy House
17 May 2016
Madonna della Carbonara
12 May 2016
The Monumental Complex Colle del Duomo
10 May 2016
Contattaci
Scopri i Musei
Museo colle del Duomo