Duomo Square, has always been the centre of political, religious and social activities in Pistoia, it hosts the main monuments, that are expression of the golden age lived by the city in the Middle Ages.

The Cathedral of Saint Zero is a wonderful Romanesque building; built in the X/tenth century, it has a façade with white-green linear bands, clearly deriving from Pisa and Lucca. The Cathedral holds Saint Jacopo’s Treasure: a wonderful Silver Altar dedicated to the Apostle James. The work was made by the greatest goldsmith masters, with the aim to preserve the only relic of this saint in Italy, conducted in Pistoia from Compostela around 1140. Beside the cathedral stands the impressive Bell Tower, 67 meters high, raised between the X/ tenth and XII/twelfth centuries. Divided into three overlapping bands, each with a different stylistic register, it offers a breathtaking view.

In front of the bell tower, the elegant Baptistery of Saint John in Court, considered one of the greatest monuments of the Tuscan Gothic style; in this structure elements of classical culture and components from Florence, Siena and Pisa coexist in a design of balanced general synthesis. 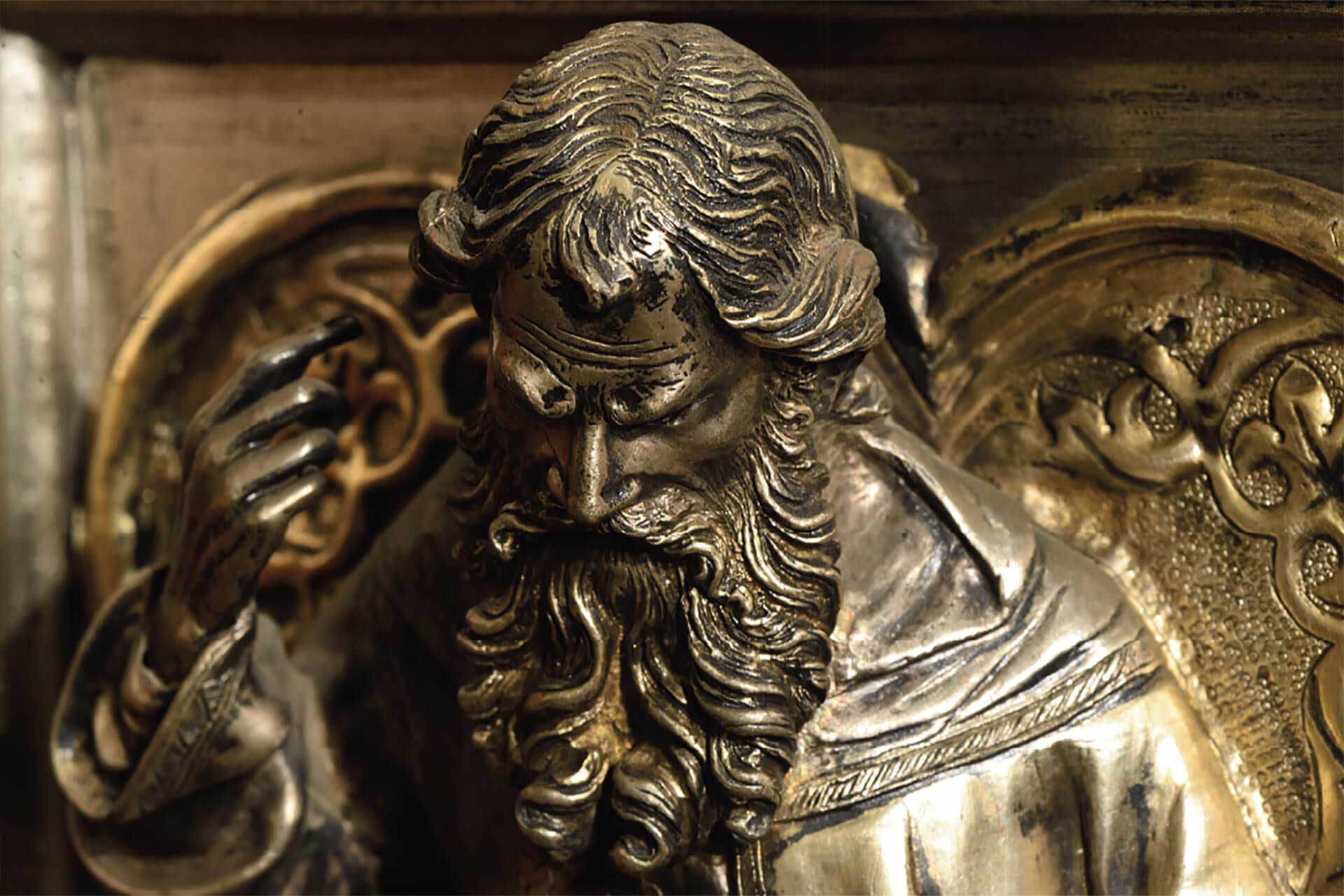 The current Chapel of Saint Jacopo, which is what remains of the XV/fifteenth century Chapel of the Judgment, holds the Treasure of the Apostle James. At the centre of the Chapel there is the Reliquary of Saint Jacopo, a masterpiece of the late Gothic sacred jewelery, dated 1407 and referable to Lorenzo Ghiberti and his workshop. This elegant work, in gilded silver, has undergone a later modification with the insertion of a Renaissance pyx/ciborium containing the precious relic of the Apostle.

The chapel takes its name from the current location of the wonderful Silver Altar dedicated to Saint Jacopo, which represents a synthesis of sacred art expressed by different artists in different historical periods. Its construction in fact, begun in 1287, involving the best goldsmith masters of the time, and was completed in about two centuries, in 1456. The cult of the saint was brought in the city around 1140, when the bishop Atto led to Pistoia the only relic of Saint James in Italy, that is why the Altar was commissioned. A silver table made in 1287, with the twelve apostles and other figures, constitutes the original nucleus of the work. In 1316 Andrea di Jacopo d’Ognabene was commissioned to create a new frontal antependium, consisting of fifteen panels depicting the life of Christ and the apostle James. In 1353 the silver statue of Saint Jacopo in a throne was built by Giglio Pisano, inserted into a large central niche. In 1361 it was decided to completely cover the Altar, through the creation of two side antependia, with Scenes from the Old Testament and from the Facts of Saint James/ Giacomo. At the end of the century the crowning of the dossal, with Christ in majesty in a mandorla/in halmond of seraphim and angelic choirs, was planned. Works continued during the fifteenth century with the completion of the two sides of the dossal. Among the artists involved in this venture the young Filippo Brunelleschi was the author of the two prophets Jeremiah and Isaiah. 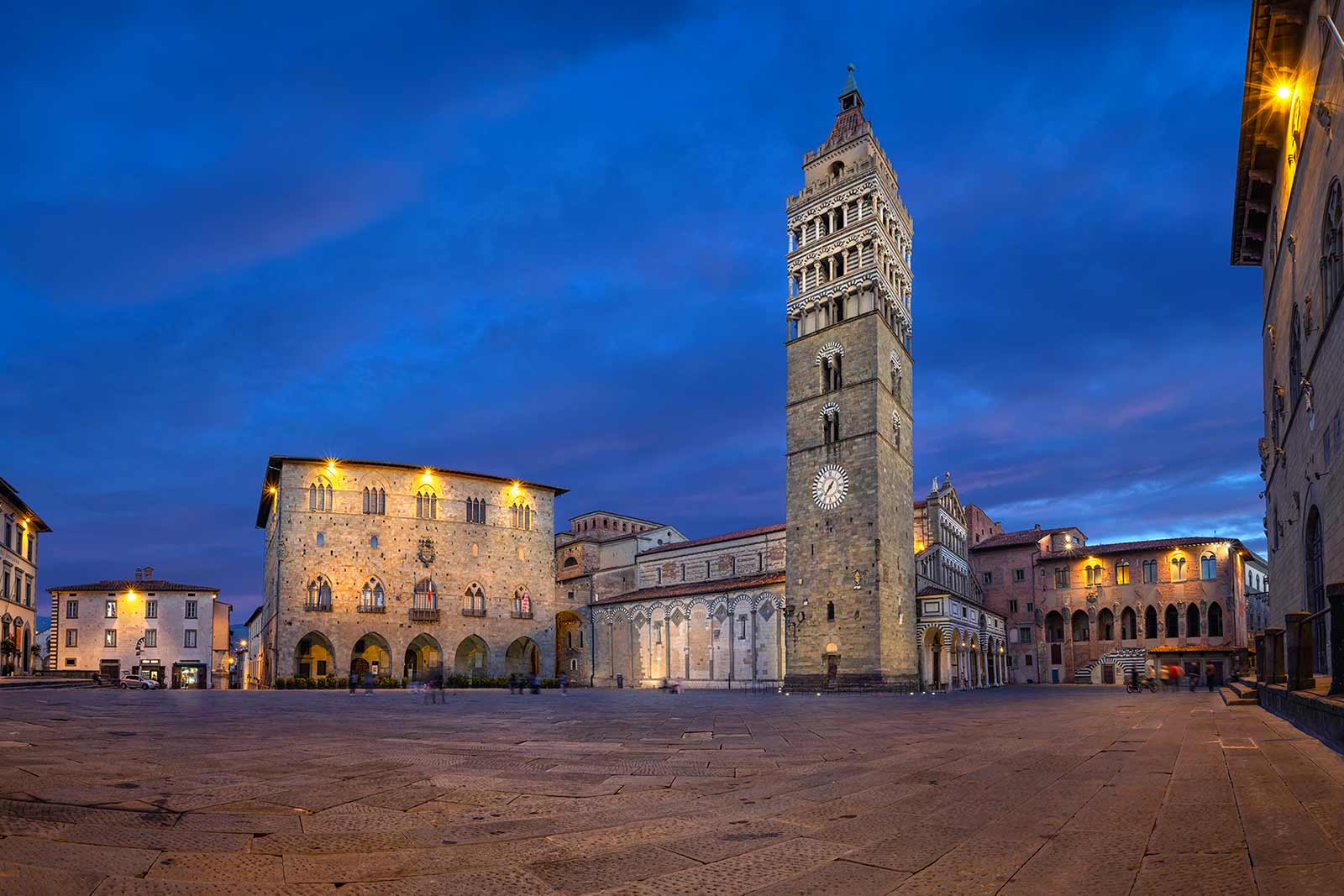 Next to the cathedral there is the 67 meters high Bell Tower, divided into three overlapping bands, corresponding to the three construction phases and to three different stylistic registers. The base part and the first two registers with the large double lancet windows and ringed lunettes are to be considered built in the first half of the XII /twelfth century. A second phase, dating from the thirteenth/XIII to the fourteenth/XIV century, refers instead to the elevation with the three orders of loggias covered in white-green marble modeled in Romanesque style from Pisa and Lucca. The crenelated tower (today the finishing point of the tour route) and the cusp, on which the little temple with four columns and the clock bell are, represent the final construction phase, dated between the fifteenth and the sixteenth century. The tower clock, dating back to 1548, is located on the north side, at the third floor. Already mentioned in a document of 1374, it was owned by the civic authorities, who were responsible for its operation. 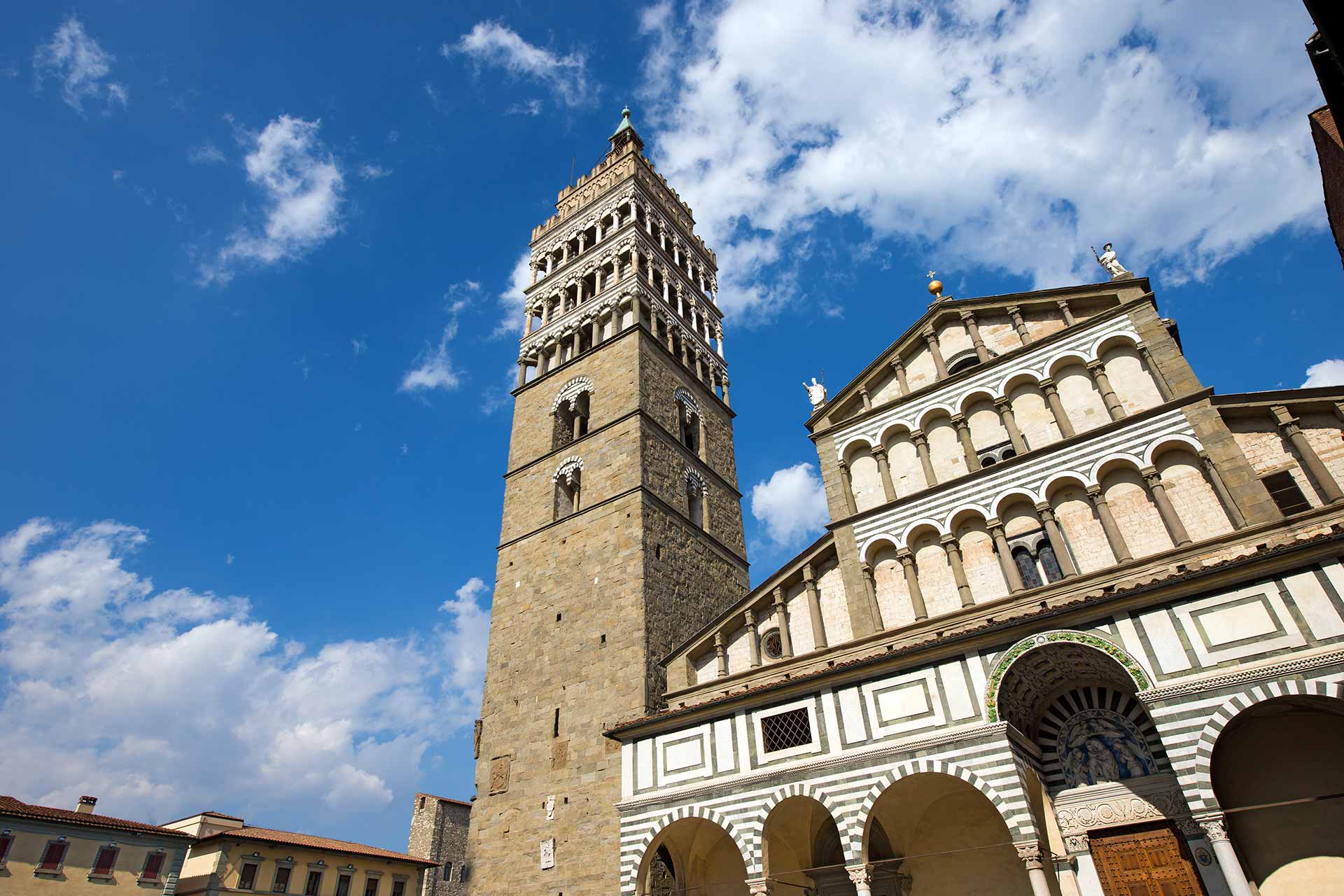 The Cathedral Church already existed in the V/fifth century, probably, even if the first documents dates back to 923, when it was named after Saint Zeno, Saint Rufino and Saint Felice. After 1043 only the title of Saint Zeno remained, in gratitude for having saved Pistoia from a terrible flood. The façade of the church, with its coverings in linear white-green bands deriving from Pisa and Lucca, is in Romanesque style; however, it was remodelled/restored during the XIV/ fourteenth and XV/fifteenth centuries, with the addition of the portico/porch and the three orders of loggias.

The central portal has a particular value, it is surmounted by the lunette with the Madonna and Child and the coffered vault made of glazed terracotta by Andrea della Robbia in 1505. The cathedral has three naves, with a raised presbytery and a crypt below. Since 1144 the last two spans of the right aisle host the Chapel of Saint Jacopo/Saint Jacopo’s Chapel, erected by the will of Bishop Atto, because of the nascent cult for the apostle James of Zebedee, whose relic arrived in Pistoia from Compostela around 1140. The chapel was destroyed in 1785 and the Cenotaph of the “dolce stil novo” poet Cino da Pistoia is on the right wall. At the top of the right aisle there is the Chapel of Saint Atto/Saint Atto’s Chapel, which hosts the urn with the remains of the saint and the great seventeenth/XVII century masterpiece of the famous painter Mattia Preti, depicting the Coronation of the Virgin with Saints Baronto and Desiderio. At the base of the presbytery’s stairway there is the access to the crypt, a Romanesque structure with a current appearance dating back to the modifications of the XVI-XVII century. In the central nave there is the large crucifix painted in tempera around 1274 by Coppo di Marcovaldo with the collaboration of his son Salerno. At the beginning of the left aisle there is the chapel of the Most holy Sacrament/SS. Sacramento, which preserves a valuable Sacred Conversation with the Saints Giovanni Battista and Donato bishop, from 1486, whose attribution ranged for a long time between Verrocchio and Lorenzo di Credi, to the latter is nowadays attributed the entire pictorial layout. The hand of the Florentine master is however visible in the funeral monument of Cardinal Niccolò Forteguerri, a work begun by Verrocchio around 1481-83 and completed, after his death, by Lorenzetto. On the counter-façade is the baptismal font, a work in white marble created in 1497 by Andrea da Fiesole, a splendid example of Florentine sculpture from the late fifteenth century. 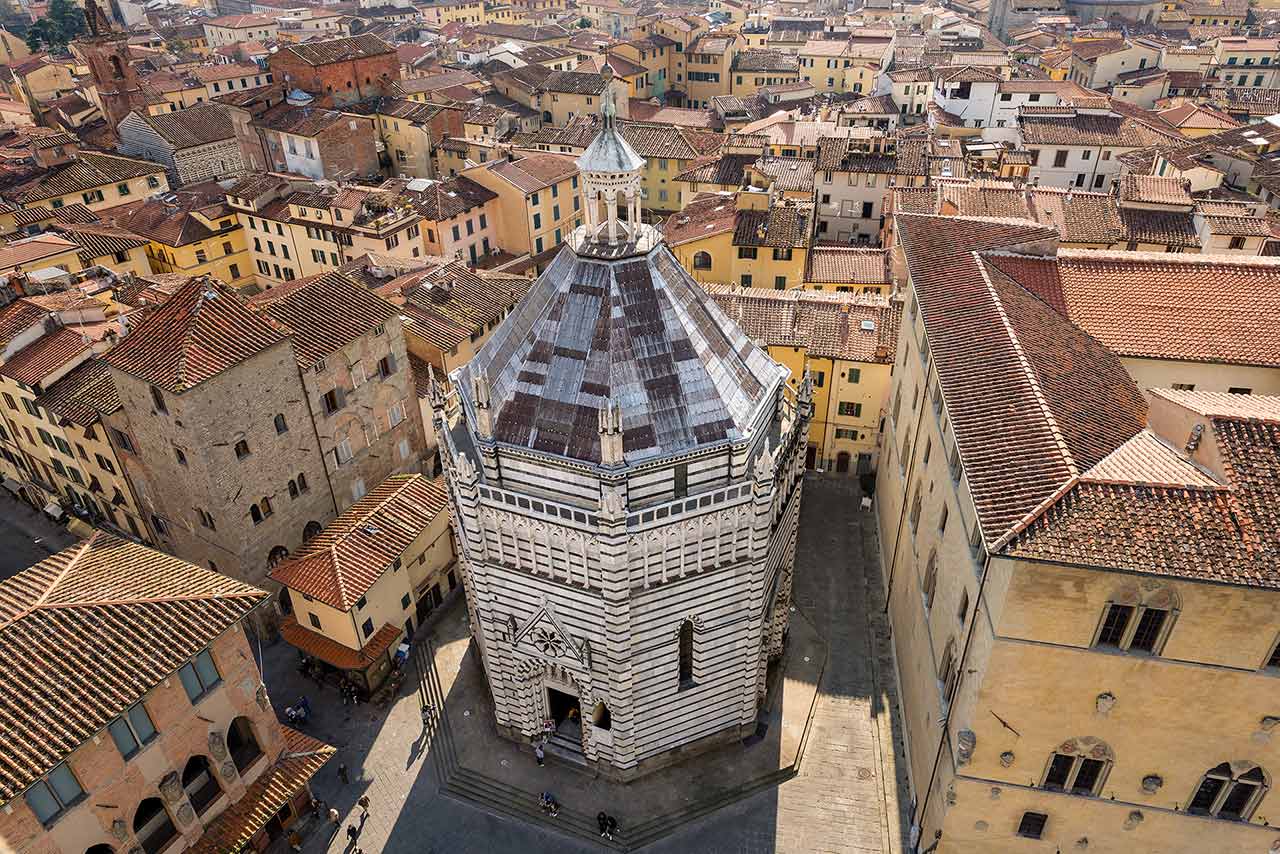 In front of the Cathedral, there is the elegant Baptistery of Saint John in Court/ Giovanni in Corte, considered one of the greatest monuments of the Tuscan Gothic style; in this structure elements of classical culture and components deriving from Florence, Pisa and Siena coexist in a design of balanced general synthesis.
The name “in Corte”/”in Court” is due to its location in the area considered of the curtis regia, the complex of buildings that constituted the Longobard political and administrative centre. The baptistery was restored at the beginning of the fourteenth/XIV century, probably enlarging an existing building used for this purpose and built on the remains of an ancient church. The decorative project was entrusted to Cellino di Nese and the external pulpit is attributed to him too. Inside there is the baptismal font by Lanfranco da Como and dated 1226; consisting of twelve panels of polychrome marbles that decorate the font, it represents the only surviving testimony of the first church.